The Territory through the ages 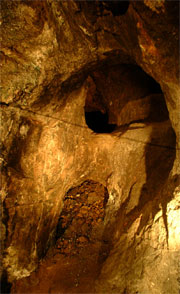 The Park of San Silvestro, opened officially in 1996, was founded in order to keep the memory alive and favour the grasp of a complex history which has always been tied to the mining activity. The area of the Park is indeed rich in minerals called “sulphides” formed following geological processes dating back to around 5 million years ago. The sulphides contain sulphur related to metals such as copper, lead, iron and zinc.

The traces of the extraction of metalliferous minerals and rocks indelibly mark the hills of the Campigliese. Even today, in mines which have been now closed for almost 30 years, the intensive use of the quarry materials persists (limestones and minerals for the ceramic industry). The archaeological research began half-way through the Eighties, endeavouring to retrace the stages in mining work organized systematically already in Etruscan times. The cramped and tortuous shafts excavated by this ancient people, barely wide enough for the shoulders of a man, represent the first approach in mining prospecting.

It was not geological or scientific knowledge which guided the ancient miners, but the experience of knowing how to recognize and follow in-depth this dark rock (which the studious of the 1900s referred to as SKARN) rich in metalliferous sulphides. 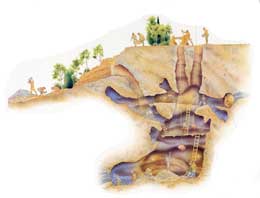 During the Etruscan times, the territory was controlled by aristocratic groups to whom can be attributed the tumulus tombs of Monto Pitti and San Dazio, and the settlement of Poggio alle Strette, located on the edge of the mining area. The history of the Campigliese is closely linked to that of Populonia, the Etruscan city made famous for the extraction and mineral working of Elban iron lying only a few kilometres away. Remains of kilns for the treatment of minerals, dating back probably to this period have been found in Madonna di Fucinaia, just before the entrance to the Park.

After a long interruption in the Roman period and in the high Medieval period, the resuming of the mining activitiy in the Campligliese is tied to the founding and development of the fortified village of Rocca San Silvestro.
Commissioned by the Counts of the Gherardesca, and inhabited by the miners and foundrymen, it represents, at a European level, one of the most significant examples of a residential village dedicated to mining and metallurgy. Other settlements of eminence desired by the Della Gherardesca family are those of Acquaviva and Biserno, of which there do not remain any traces, and the castle of Campiglia. 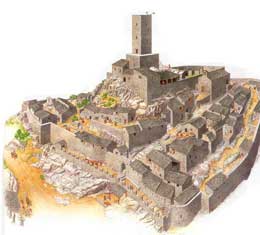 The mining technique used by the Medieval miners did not differ greatly from those of the Etruscans and the prospecting was concentrated in that period in particular in the Valley of Manienti and Lanzi, behind Rocca San Silvestro.
In the park, the openings of around 200 ancient mines have been identified, belonging both to the Etruscan and the Medieval periods, some of which are indicated along the visiting routes.

After the abandoning of Rocca San Silvestro at the end of the 13th Century, only Cosimo 1st of the Medici, Grand Duke of Tuscany, resumed an interest in this territory, sending in specialized miners from Tyrol and Versilia. The Lanzi, famous for their expertise, constructed buildings (Caprareccia and Villa Lanzi) and experimented with new methods of open-cast mining. Technical difficulties in the separation of the various metals caused them to abandon the area in 1559. 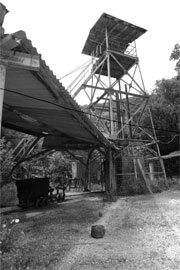 The discovery of the Enlightenment period and the early studies of naturalists and geologists at the beginning of the 1800s gave a new push to the mining prospecting. The extraction technique changed completely, thanks to the use of gunpowder followed by explosives, capable of crushing great volumes of rock. The mines were organized into extraction levels on several layers, with long horizontal tunnels linked by vertical wells, used for shifting minerals and workers in industrial lifts.

The Earle Shaft, with its castle of metal, represents the deepest of the five mining shafts excavated between 1800 and 1900 for accessing all levels of the mines. Many evident signs still remain of this more recent phase of mining extraction: the tunnel mouths, the shafts, the remains of the railways used for transporting the minerals, the mining buildings of the early 1900s, which today houses the ticket office, the Restaurant and the Hostel of the Park (Palazzo Gowett).

History of the Park

The project of the San Silvestro Park stems from a specific research experiment.
Indeed, it dates back to 1984 when the first campaign for excavating the castle of Rocca San Silvestro, lead by the Teaching of Medieval Archaeology of Siena University in collaboration with the Municipal Administration of Campiglia Marittima and numerous European University Departments.

Beside the intensive excavation of the castle, a systematic research of the entire surface of the Campigliese territory was also started, in order to reconstruct, through the archaeology of the landscape, the systems of settlements in the various historical periods (from Protohistory to the modern day) and the approach of the communities to the resources available. 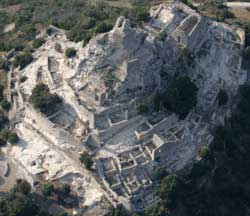 Today Rocca San Silvestro and its copper and silver mines constitute a reference point at European level for rewriting, on an archaeological basis, the history of the organization of the mining work in the Medieval period.

The archaeological research, catalyzing the interest of naturalists, historians, administrators and protection bodies for this territory, thus gave the first push to the establishment of an Archaeological Mines Park.

The original pilot project dates back to 1989, when by appointment of the Municipal Administration of Campiglia Marittima, the general lines of the Archaeological Mines Park of San Silvestro were defined for the first time.

The aim was not only to develop and create a museum from a single monument, but an entire historical landscape, the result of centuries of mining workings, combining the development of the local resources with the protection of the environmental and historical assets.

With the acquisition of land and real estate by the Municipality of Campiglia Marittima, a further and more definitive step forward was made towards the completion of the project.

Thanks to the European Community funding, ex.reg. Cee n. 328/88 Resider I, it was finally possible to begin the definitive construction.

‘70s-‘80s: planning of the territory coordinated with the Municipalities of the Val di Cornia, with the identification of the area to be destined for territorial public parks

’80s-’90s: scientific research aimed at the familiarization of some of the areas of park (archaeological parks) aimed at the production of a masterplan for the archaeological Parks, defining the aspects of development, availability and facilities

‘80s-’90s: acquisition of the areas through expropriation or good-natured agreements (Archaeological Mining Park of San Silvestro, Archaeological Park of Baratti and Populonia, Coastal Park of the Sterpaia)

1994-1995: start of production work for the Archaeological Mining Park of San Silvestro

1996:opening of the Archaeological Mining Park of San Silvestro

2000-2003: production work on a Documentation Centre in Villa Lanzi and a 90-berth Hotel in Palazzo Gowett in the Archaeological Mining Park of San Silvestro

2005: start of the activities of the Documentation and Training Centre of Villa Lanzi

2005: start of development work of the Archaeological Mines Park of San Silvestro

2006: opening of the “Lanzi – Temperino Direct” Tunnel” and the Museum of Minining Machine and Social History of the Miners in the Archaeological Mines Park of San Silvestro.