Details
The Archaeological Park of Baratti and Populonia

Area of the necropolises and the experimental archaeology centre

The necropolis is situated in the lower part of the park near the visitors centre (Podere San Cerbone). Visitors can admire the burial mounds and aedicola tombs of Populonia (7th - 6th centuries B.C.) showing the evolution of styles of funerary architecture. Over time this area became overlaid with slag from ancient metal-working activities..

Necropolis of the Caves

On the hills overlooking the Gulf of Baratti, a necropolis stretches, composed of chamber tombs, excavated into the rock which are alternated opposite the quarry for the extraction of the “panchina” stone, which over the centuries was used as a building material.

At the moment, there are no activities at the center for summer 2020

The experimental archaeology centre "Davide Mancini" is located in Campo all`Arpia on the way to the Necropoli delle Grotte. The following activities may be pursued here: working of soft stone into prehistoric ornamental objects: the reproduction of pre-protohistoric pottery; the fusion of material derived from original objects to reconstruct protohistoric metal artefacts; weaving - experimenting with ancient techniques; Stone polishing.

Reproduction of pre-protohistoric pottery: Adopting mainly the modelling technique called "a cercine" or "a colombino", a mixture of clays may be used to make not only open vessels like bowls but also closed receptacles. A series of tools made of wood, bone or metal are available for the execution of the different types of decoration.The last phase is the firing which, for practical reasons, has to be carried out using modern techniques. However, the way in which they differ from the firing techniques peculiar to the ancient kilns is explained. Stone polishing: Stones can be worked to produce ornamental objects, such as pendants, necklaces and bracelets modelled on those of the various prehistoric cultures. The raw materials consist of soft stone such as graphite and alabaster, and other materials such as sea shells or wild boar tusks. It is also possible to tackle axe and hatchet making, depending on the availability of appropriate raw materials (basaltic and green rocks).The experimental archaeological centre at any rate offers a varied range of laboratories to be tried upon reservation for groups and students.

Duration of the visit: variable
Along the Via del Ferro, the industrial quarters can be reached: they contain areas surrounded by walls within which were performed some of the main activities involved in the production of iron, such as the baking of the hematite which was used to prepare the mineral prior to being inserted in the main kilns. Even today, heavy seams of a dark red, almost purple colour are visible, which indicate the presence of the production activity.

Area of the Acropolis

Acropolis of Populonia
Duration of the visit: about 1h30 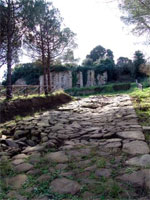 A straight and easy route leads visitors opposite the remains of the important Roman temples which overlook a great square located in the centre of the ancient city. A path running along the paved way leads ultimately to the Logge, an imposing terracing which constitutes the base on which other rich environment are divided. A picturesque itinerary reaches the summit of the promontory where the remains of the first Etruscan settlements of Populonia are located and the oldest walled circuit of the city. Panoramic views over the entire landscape round the northern coast and the Island of Elba.
Acropolis of Populonia: "works in progress".
An important project will give a new face to the Park: a reconstruction of the entire basement of one of the temples, the reopening to the public of mosaic floors, a new visitor route at the ancient city walls. In Spring, the guided tour will be in these areas.

Duration of the visit: 30 min

Il monastery, hidden in the woods, dates back to the 11th Century B.C. around the cloisters, once richly decorated with sculptured, the church is followed by monastic environment, dominated by an imposing tower.

A route between tumulus tombs and ancient buildings involved in the workings of iron, with interesting environmental features.

Via delle Cave
Duration: 2 hours
A route within a dark wood dotted with ancient quarries for the extraction of the rocks for construction and chamber tombs excavated into the rock. Along the way, a spectacular panorama over the Gulf of Baratti and the necropolis of the Caves.

Via del Monastero
Duration of the visit 2 hours30 minutes 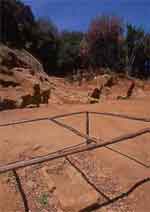 The route breaks off from the Via della Cave and follows on in the slope opposite the promontory until it reaches the Benedictine Monastery of San Quirico and thereafter in the direction of the Acropolis of Populonia. Extremely picturesque panoramic views.

Via della Romanella
Duration of the visit 2 hours 30 minutes
Along the Via del Ferro, starts a route which leads up until the remains of the ancient wall of Populonia and then goes up to the acropolis of the city, running back to the ancient basolato-paved road hidden today by the wood.