Details
The Coastal Park of Rimigliano

The beach and the dunes 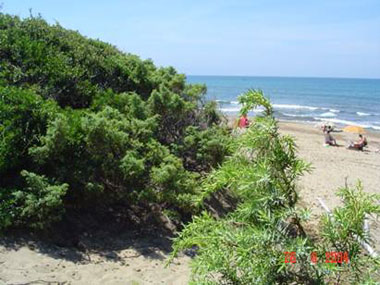 The coastal park of Rimigliano with its protected system of dunes , offers the opportunity for a bathing experience completely surrounded by nature, with the vista ranging from the vegetation of the promontory of Piombino, the tangle of shrubs sand-beaten by the wind which hits the beach, and the unmistakable light blue silhouette of the Tuscan archipelago of islands on the horizon.

The beach is around 6 km long; at the shoulders of the beach, the rich pioneer vegetation of the dune.
The access routes, exclusively pedestrian, are present long the Road of the Princess (Strada della Principessa); the main ones are marked by numbers, in a rising order following the direction San Vincenzo-Piombino. Other intermediate access routes are marked by break in the wooden fence which borders the edge of the Park with the road.
There are no bathing establishments, but public facilities with toilets and showers located along access points numbers 2, 3 and 4.
Areas equipped for picnics are located in various points of the section included between access points 1 and 4, where there is also a restaurant point.

Within the Park of Rimigliano, under the dense foliage of the holm oaks and pines, a fitness route was completed, made up of 18 stopping points, each of which offers exercises which train different parts of the body, with various levels of difficulty, adapted to all ages.
The route, which winds along a kilometre, is free access and offers six free-body exercises and twelve with the use of various apparatus.
At each stage an explanation chart, in four languages, illustrates the exercises to be performed using texts and pictures. Completing the exercise programme takes approximately 90 minutes.
At the route, the main entrance to the Park of Rimigliano is accessed, number 4, at the junction with Via del Lago, an area which is usually frequented by jogging enthusiasts and nature-lovers keen on walking in the green, not only in the summer season.
The route was completed in the field of an initiative named “The Creative Tree”, a social inclusion project for the insertion to working life of the inmates of the prison of Massa Marittima, handled by the social Cooperative “Il Nodo” and supported by the Tuscany Regional Authorities, the Municipalities of the Metalliferous Hills and the Prison Service of Massa Marittima.