Temperino Museum (Archaeology and Minerals)
Duration of the visit: 20 minutes 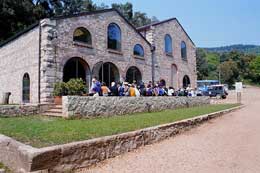 The museum provide the visitor with solid background information. It is located at the entrance to the park in the Temperino area, in a large building erected at the end of 20th century to produce energy for the mine. The museums has been set up paying great attention to the communication of scientific data: the section dedicated to the Val di Cornia provides an introduction to the history of the area; the geology section shows the character and mechanisms of the formation of the mineral deposits of the Campigliese, exhibiting a representative selection of mineral samples; the Rocca San Silvestro section gives a concise overview of the information revealed by excavation, using archaeological finds and hypothetical reconstructions of metallurgical processes documented on the site.

Temperino Mine
Duration of the visit: 40 minutes 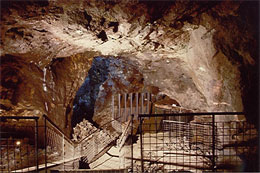 The visit to the Temperino Mine starts at its Museum, an area set up with illustrative panels showing the development of mining techniques in the Campiglia area. The Mine Tunnel is an evocative 360 metre underground walk revealing excavations and other evidence of mining activities from Etruscan times as well as from the modern era. The nineteenth century Temperino mine contains archaeological and mineralogical evidence offering a complete picture of how techniques for the extraction of copper, lead and silver ores evolved. Equipped with helmets and coloured waterproofs, once inside the mine the visitors discover a broad range of rocks and minerals from the metalliferous reserves of the Campigliese and the traces of the work of the miners, a memory of the fatigue and harshness of a profession which has now almost disappeared.

Area of the Earle Shaft 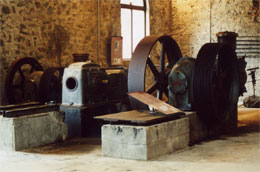 Housed in the service building of the Earle Shaft, the only surviving of the 5 mining shafts which were located in the area of the Campigliese at the beginning of the last century. This building housed the winch which, in the last stage of the life of the mines, transported the miners to a depth of up to 170 metres. Today the Museum with its storyboards inside and outside, tells the story of the usage of the various pieces of machinery belonging to the last stages of activity remaining where they were abandoned on the last day the mine was open. 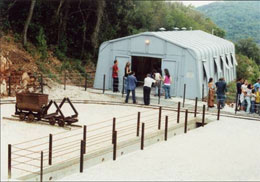 Leaving the Mining Machinery Museum after a short walk, the visitor arrives a the entrance to the Lanzi – Temperino tunnel and the “Morteo”, or the metal “shed” used by the miners as a changing room and canteen.This building today is dedicated to the miners, with a collection old photos and documents which tell of their lives, their work, the illnesses and the trade union struggles to prevent the closure of the mine. The harshness of this noble trade is told in a video by the miner Duma to the visitors who, seated on the benches where in days of old the meals were eaten before returning to work, want to listen for a few minutes. 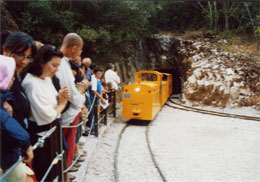 The direct Lanzi-Temperino Tunnel (ex Ortaccio) was started as mining prospecting in the second half of the 1800s. It was then completed by the Mining Company of Campiglia Marittima Spa in the 1960s as a haulage tunnel for the transport of minerals from the extraction shaft to the crushing and flotation installations of the Lanzi Valley. The minerals were transported on mine-cars along narrow-gauge tracks. The same journey the minerals took in those days can be taken today by the visitors who, aboard the train running through the tunnel, can reach the Lanzi Valley and Rocca San Silvestro. Inside the tunnel, the working tools, the shapes and colours of the minerals and a picturesque stop in the grand central extraction room will take the visitors on a discovery of an extraordinary underground world.

Area of the Lanzi Valley 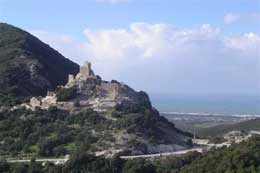 Rocca San Silvestro, a medieval village of miners and smiths, was founded by village lords between the tenth and eleventh centuries in order to exploit the abundant local deposits of copper and silver-bearing lead ore. The metals were to be used for coin production ("zecche toscane") principally in the mints of Lucca and Pisa; the village lords enjoyed close commercial relations with these cities during the period. In medieval times this village was known by the name of Rocca a Palmento (a millstone, or "palmentum", has been discovered in the oil press below the church) and owes its present name to the saint to whom the church was dedicated. The village was abandoned during the course of the fourteenth century as a consequence of a variety of factors which were principally economic and connected with a change in the system of resource management. The visitor follows an itinerary designed to show the social and economic organisation, the eating habits, the building and metallurgical techniques of a medieval community. The access to the Rock is possible following a path suitable for taking preferably with trainers or walking boots. Time necessary from Lanzi Valley to Rocca San Silvestro around 20 minutes 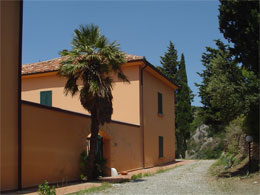 This takes the visitor from the exit of the Temperino Mine back to the Museums, in part retracing the route taken by the railway which transported metal ore in the early years of this century. It illustrates the main phases of mineral exploitation in the area - mine shafts, tunnels, and waste left behind by centuries of mining activity.

This path leads from the Temperino Mine exit to the washing plant of the Lanzi valley. Winding along the line of metalliferous veins, it takes in the main archaeological and mining features of the area which are visible at the surface, including the entrances to medieval and more ancient mines, the impressive opencast quarries, the remains of extraction shafts and tunnels. The dominant colours to be seen along the route are the yellows and reds of the by now abundant slag half hidden by the luxuriant vegetation of the Mediterranean scrub.

This path leaves the Valle dei Lanzi washing plant and follows the valley as far as the Walter Pit just underneath the limestone quarry of Monte Calvi. The most important deposits of silver-bearing lead ore (argentiferous "galena") in the Campiglia area are to be found here. This is the route which best reveals the activities of the medieval and renaissance periods - indeed it takes its name from the Tyrolean miners who were active here in the sixteenth century. From this pathway the medieval village of the Rocca San Silvestro may be reached.

This path goes from Rocca San Silvestro along the Manienti valley to the industrial village built by the Etruscan Mines Company at the beginning of the twentieth century. Along the path which follows the traces of an old road, still paved in parts, the visitor will come across some medieval mines and the remains of ancient marble quarries. From a naturalistic point of view the route is of particular interest for its dense vegetation consisting of plants which are typical of the scrub of the Tuscan coastal area.

This pleasant wooded path leads from Temperino to the castle of Campiglia Marittima through clearings and charcoal pits and the cultivated fields in the immediate vicinity of the village. The visitor will come across springs and the remains of the aqueduct which supplied Campiglia with water until fairly recently. 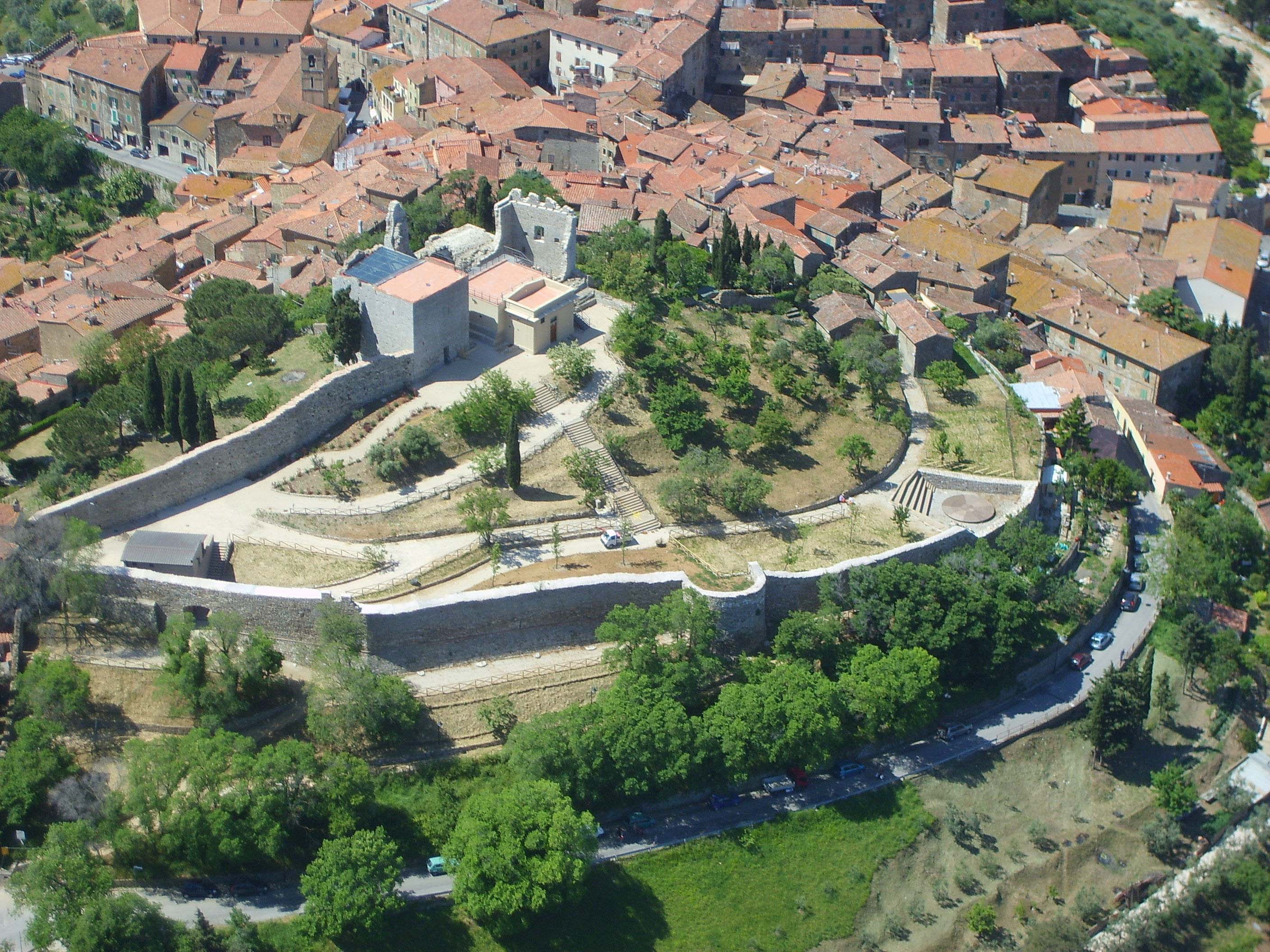