Details
The Archaeological Museum of the Territory of Populonia

Containing over two thousand exhibits, from the Palaeolithic to the late-ancient period, the Museum favours the Etruscan and Roman section inherent in the ancient territory of the city of Populonia.
The museum collection enable the visitor to read the dynamics which led to the development of the territory, through the analysis of the artefacts, starting from the prehistoric and protohistoric ages and the methods which determined the formation of the Etruscan city, its decline in the course of the late-ancient and Medieval ages up until the emergence of Piombino. 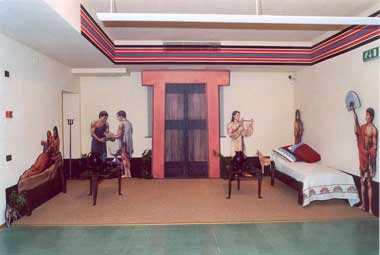 Designed with an educational mission, the museum has been set up for guided visits and research projects - it has classrooms and experimental archaeology workshops for groups and schools. Rooms where events and temporary exhibitions can be held, and lecture halls, make it a versatile centre for a variety of activities.

The expository route is followed over the two upper floors of the palazzo Nuovo.

In addition there are reconstructions of the environment designed to show the radical changes man has wrought in different periods: prehistoric times, Bronze Age villages, Etruscan cities, the rural landscape, and the system of villas in the Roman era, the abandonment of the towns in late antiquity, and the mining landscape of the early 1900's.

The reconstruction of an Etruscan banquet has been produced, which may represent a fun moment between visitors and animators. Through it also blind persons can have a tactile experience.

History of the Collections

The archaeological material found in the museum was recovered from the territory of the Val di Cornia between the 1800s and the 1900s. The smaller part contains artefacts which were acquired with public funds from private collections, from confiscations and donations.

Since the beginning, entire tomb complexes from the Villanovian age have been placed in the collection and also finds coming from the public buildings of the city from the Archaic period.3-01.jpg Of special interest :

In the course of 2003, the collection was increased, thanks to the now consolidated collaboration with the Val di Cornia Parks S.p.A. the Municipality of Piombino and the Office for the Archaeological Assets of Tuscany.
Among the new arrivals, the following are featured:

In December 2004, thanks again to the collaboration with the Office of Florence and the Municipality of Piombino, a new exhibition was produced, integrating the following: 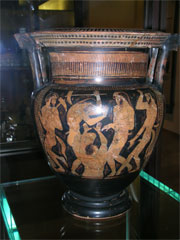 In July 2005 the Desideri-De Stefano donated to the Museum a splendid Attic-production vase with red figures, made by a ceramic specialist in the workshop of  “Pittore di Firenze (mid-5th Century A.D.) and depicting a myth of the fertility.

The Archaeological Museum of the Territory of Populonia