The San Silvestro Parkimmersed in a landscape of woodland and scrub characteristic of the Tuscan coastal regions, boasts a fauna of often surprising variety. Here man has defied nature for centuries in the pursuit of precious minerals. 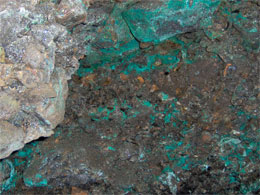 The Park is a veritable natural laboratory where the visitor can observe many of its geological features and examine a complete collection of samples of the principal types of minerals and rocks. There are rocks representing the three principal mechanisms of rock formation identified by geologists - sedimentary, magmatic and metamorphic rocks.
The enormous variety of minerals is shown by the presence of over ninety different mineral types. The complete collection of the Park`s rocks and minerals available for inspection in the museum will enable the visitor to learn to recognise them.

The vegetation of the Park is typical of the hills of the Tuscan coast. There are three main types of habitat: 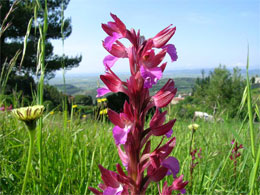 Due to the soil peculiarity, many types of spontaneous orchids live in the areas of the Park of San Silvestro and Monte Calvi.
Val di Cornia’s spontaneous orchids are linked to the ancient legend of Ubertenga, whose story dates back to the time when Saracen pirates raided the area. At that lime the young woman lived with her father, Admut the potter, near Rocca San Silvestro, where he had his workshop. On a tragic autumn morning, Saracen pirates landed on the beaches opposite Mount Calvi and viciously wiped out every village, killing the potter and his daughter too, on the meadow by their home. But the drops of blood shed by Ubertenga flourished into lovely flowers , never seen here before .Even today, the little valley where the massacre took pIace is called "Prato ai fiori", the flower meadow, near the Solvay quarries.
Val di Cornia is home to countless spontaneous orchids: they are wide-spread, especially on Mount Calvi's rough, limestone slopes and on surrounding hills. Orchid enchantment is said to due not only to their beauty, but also to the secrets they keep. They are bulbous plants that have developed extremely sophisticated strategies for adapting and reproducing: some have flowers that stimulate the abdomen of insects, to attract them and make pollination easier. Other orchids attract insects with brightly-coloured flowers and "trap" them with the shape of the corolla, which pushes any alighting insect into the flower, where both ovary and stamen, with the pollen, are to be found..

This environmental diversity is reflected in the fauna, which is very varied. It is impossible to give a complete picture of the animal species to be found in the Park, but the visitor will soon become aware that this rich natural environment affords some often thrilling encounters to add to the experience of the exploration of its geology, archaeology and mining history.