The concept behind the San Silvestro Park 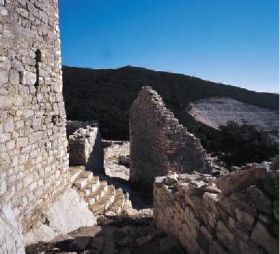 The San Silvestro Park project arose out of a specific research experience. The first excavations at the medieval village of Rocca San Silvestro were carried out in 1984 by the department of the Teaching of Medieval Archaeology of the University of Siena in collaboration with the municipal administration of Campiglia Marittima and numerous European university departments. At the same time as this intensive excavation of the village, a systematic surface survey of the whole of the territory around Campiglia was begun in order to reconstruct, from the archaeology of the landscape, the systems of settlements in the various historical periods (from prehistoric to modern times) and the approach of these communities to available resources. Today Rocca San Silvestro and its copper and silver mines have become a reference point at European level for a rewriting, on an archaeological basis, of the history of the organisation of mining operations in the Middle Ages. By stimulating interest in the territory among naturalists, historians, administrators and conservation bodies, archaeological research gave the first impetus to the creation of an archaeological mines park. On the instigation of the municipal administration of Campiglia Marittima, the general outline of the San Silvestro Archeological Mines Park was sketched out in an original pilot project in 1989. The aim was not just to give value to, and make a museum out of, a single monument but to do this for an entire historic landscape, the fruit of centuries of mining activity. The project is also innovative for Italy and repeats the experience of many European mine parks which are successfully combining the promotion and development of local resources with the safeguarding of the historical and environmental heritage.

The archaeological excavation at San Silvestro 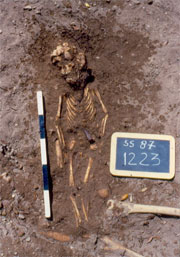 The archaeological research programmes at Rocca San Silvestro were started in 1984 by the Department of Teaching of Archaeology and History of Arts of the University of Siena, in collaboration with numerous European university departments. The research was supported by the Municipal Administration of Campiglia Marittima and the active involvement of the "Soprintendenza Archeologica" of Tuscany and the "Soprintendenza ai Beni Architettonici e Ambientali" of Pisa. The excavation, involving two thirds of the site, has revealed the complex layout of the village and allowed the functional organisation of the living quarters to be defined. It is precisely the internal spatial organisation of the settlement, with areas set up for metallurgical production, which reveal Rocca San Silvestro as a centre whose birth, development and decline depended on its industry and on the managerial skills of its lords

After being abandoned for over 200 years, mining activities, especially prospecting, were taken up again at the beginning of the nineteenth century, leading to mining concessions being given to foreign groups - first French then English - during the second half of the century. Some of the most interesting literary documents in the area refer to this period and have been published. These include descriptions of the mineral deposits and of the ancient mines which were left by the French mining engineers and geologists (Simonin, Coquard, and Blanchard) who worked for these companies, or others who visited the extraction areas during or after periods of activity (Burat,vom Rath, and Pilla). The structures and tunnels of the mines of this period are still partly visible and some have been restructured to house the reception facilities of the park. The most famous English mining company was the Etruscan Copper Estate Mines, established in London at the end of the year 1900; it has left us the finest monuments of industrial archaeology in the territory of the Park. The company collapsed after about 7 years, leaving the still visible traces of the buildings and infrastructure of the mines. Five extraction shafts were sunk and linked to a 5 kilometre narrow gauge railway for the transport of ore. The track ran at 212 metres above sea-level from the Gowet Pit, taking in the Gran Cava Pit and the Earle Pit, along the Lanzi Valley where an inclined plane (partly on pillars and partly on the ground) connected it to the second level of the Walter Pit.

From here the track continued as far as the metallurgical processing centre in Loc. Campo alle Buche, whose ruins and slag heaps are still visible among the vegetation of the slopes of Monte Rombolo. Still perfectly recognisable are the washing plant and the roasting and reduction furnaces, which make this one of the jewels of the industrial archaeology of copper and lead of the early years of the century. Various mining companies succeeded the Etruscan Copper Estate Mines until the fifties, in rare cases re-activating the mines only for sporadic prospecting. The only companies to carry out systematic prospecting were the Ferromin and the Anonymous Mining Company of Lanzi in the forties. The first mostly cut trenches (still visible on the Poggio all`Aione) and deepened already existing tunnels (Collins); the second reopened the workings at the Walter Pit (the Lanzi Mine). Activities were then more or less suspended until the end of the fifties, when prospecting was taken up at the Lanzi Mine by the Societa F.lli Carlo and Alessandro Parodi and at the Temperino Mine by the Ferromin company. Subsequently, the mining concession for the Lanzi Mine was given to the "Miniera di Campiglia S.p.A" and that of Temperino to the "Societa generale per l`Industria Mineraria e Chimica" of Montecatini. From 1995 on, the concession was given to the "Miniera di Campiglia S.p.A" alone, which reopened the old Earle Pit of the Etruscan Mines Company, extended all the workings that had been started by the English, and operated until 1976 when, despite an intense battle by the unions, the mine was forced to close. Since the closure of the mines, the area has been exploited principally for its limestone. This has led to the opening of many opencast limestone quarries in the hills surrounding Campiglia which are still active.