Details
The Archaeological Park of Baratti and Populonia

Among the most famous Etruscan cities, Populonia established itself, starting from the Iron Age (9th Century B.C.), as a landing point and strategic meeting place between the Tyrrhenian routes connecting Sardinia with Corsica and Etruria, continuing at the same time a control on the mineral deposits of the Campigliese (currently visitable in the Archaeological Park of San Silvestro). 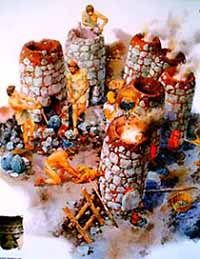 Between the 4th and 6th Centuries B.C., Populonia became the main steel and iron industrial centre of the Mediterranean in the working of hematite, the mineral in which the Island of Elba, situated directly opposite Populonia, was rich. Populonia is spread over a lower city and an upper city, that is in an area centred on the port on the metallurgical activities (located outside the surrounding wall) and in an Acropolis, with the houses and the temples, on the summit of the promontory.

The Necropolises
The necropolises which can be visited today are situated on the first slopes on the plain opposite the Gulf of Baratti.
In the area facing the sea, the necropolises of the 5th-6th Century B.C. are spread. They contain monumental tombs, in tumuli or shrines, which belonged to the most prominent figures of Populoniese society. Beside these rich family tombs, a series of sarcophagus tombs are to be found, which mark the presence in this area of widespread affluence until the 4th-5th Century B.C.
However, on the hills behind, the necropolises of the 3rd-4th Century B.C. are located: these contain Etruscan tomb features excavated into the rock, accessible through deep rocky stairways. The tombs are interspersed with quarries for the extraction of “panchina” stone, a soft local sandstone, which for centuries was used in Populonia for the construction of public buildings, walls and monumental tombs. 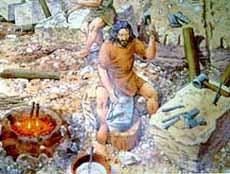 The oldest testimony of the settlement of Populonia dates back to the 9th Century, when the main houses were built on the summit of the Promontory. The settlement in this area, underwent numerous transformations until the 7th Century when it was abandoned. Inside a trench which housed the central pile of one of the houses, numerous cups have been found which were used, evidently, for proposing toasts, perhaps, to the celebration of a rite tied to the destruction of the same building.

Even today, the excavations have not unearthed the settlement of the 3rd-5th Centuries B.C. with the exception of the two surrounding walls: the older, from the 5th Century B.C., broke the summit of the promontory with a mighty polygonal wall, while the one from the 3rd-4th Centuries B.C. is of much greater dimensions and manages to include the entire acropolis and a good part of the settlement which, in this period, must also have stretched along the peaks of the main slope. It appears that this important wall marked the limits of the living area of the city, leaving outside the industrial zones and the necropolises.

Very little is known from the sources of the Roman conquest of Populonia, but it is certain that by that period in the 2nd Century B.C., the ancient Etruscan city was by then in the political sphere of Rome.
The monumental remains which were recently unearthed in the excavations indicate that the central part of the acropolis was concerned with a great town planning project which gave a new face to the city, which was by then Roman.
Three great temples overlook a large square, from which a paved road leads to monumental terracing marked with a face of blind arcades, known as the building of the Logge. The road does bear carriage wheelmarks and its gradient indicates that it was probably used only by foot.
On the great terracing, at the base of which stretch a series of environments, amongst which there are thermae, which were composed of fountains and other thermal installations. They contained luxurious rooms, decorated with plasters painted to look like different marble openings and floors decorated with mosaics, including one in a marine style depicting a shipwreck visible today in the Archaeological Museum of Piombino.
SOn the summit of this system of terraces, there must have been another temple: the overall building complex probably constituted a sanctuary. The divinity to which all this is dedicated may be identifiable to Venus.
The excavations indicate that from midway through the 1st Century B.C. the city must have come to a stop, perhaps due to the Sillana destruction. At the end of the 1st Century B.C., The Greek geographer Strabone talked of an acropolis of which there remain only the temples, a lively port and a rich countryside.

The excavations on the beach of Baratti indicate as in the course of the Imperial Age (2nd-3rd Century A.D.) and in the latter ancient times (4th-6th Century A.D.) on the banks of the gulf, life was still in full swing around the road which must have joined the lower city of Populonia with the Via Aurielia, situated within. The demise of the city of Populonia is remembered by poignant verses which the poet Rutilio Namaziano dedicates in the event of his visit along the coast of the 5th Century A.D.

Medieval Times
Archaeology is still investigating the disintegration of the ancient city in the Medieval panorama, but in the hill situated opposite the acropolis there are the excavations which restore the remains of a Benedictine Monastery which remained hidden among the woods for centuries.
Its foundation dates back to the 11th Century, when the foundation of monasteries and castles consisted of a key passage in the assertion of the local lords. The excavation has highlighted a first construction stage, preceding the foundation of the monastery itself, consisting of a small chapel, upon which the larger church was then set. In the centre of the monastery, there is a large cloister onto which various buildings and the tower overlook. The sculptural remains indicate that the decorations of the cloister and the church must have been very numerous and very precious.
The area was frequented long after the monastery was abandoned, as the cemetery situated around the church indicates.

Following periods and the modern times
Currently being updated

History of the Park

The Archaeological Park of Baratti and Populonia, opened on 11th July 1998, two years after the Archaeological Mines Park of San Silvestro, houses one of the most important contexts of Etruscan civilisation, which owes its own commercial and cultural development principally to the steel and iron activity.
It is not by chance that the story of the discovery of the ancient city of Populonia, is tied significantly to the recovery of the iron slags, which in Etruscan and Roman times built up around the gulf of Baratti, burying the ancient necropolis.

The story of the research, in Populonia, is a story which started long ago. Early investigations organized date back to halfway through the last century, and over time they have been centred on the necropolis area, done such that these still represent today the principal source of information and the most significant monumental situation within the park. In recent years, however, research started on the urban and industrial context, thanks to which it will be possible to complete the historical framework of this territory and examine in-depth the aspects of the rapport between the settlement and the resources, which constitutes again the thread for understanding the complexity and the development of the past civilisations

The Park of Baratti and Populonia, in its current dimension, is thus the result of archaeological excavations conducted in past years by the Archaeological Office and, between 1996 and 1998, by the Val di Cornia Parks Company under the scientific management of Dr. Antonella Romualdi.

With this act, it was granted the use to an individual with private rights an archaeological patrimony of state property, eliminating the bureaucratic red tape which would have prevented the appreciation, in its unitary state, of the cultural value of this archaeological and natural site. It was thus demonstrated, for the first time in Italy, that it is formally possible to allow the use, for cultural development, to an individual with private rights, even if with a majority of publicly-funded capital, an archaeological patrimony of state property; this act opens up new relations between the State and the private sector and can offer useful information for the future of cultural assets.

‘70s-‘80s: planning of the territory coordinated with the Municipalities of the Val di Cornia, with the identification of the area to be destined for territorial public parks

’80s-’90s: scientific research aimed at the familiarization of some of the areas of park (archaeological parks) aimed at the production of a masterplan for the archaeological Parks, defining the aspects of development, availability and facilities.

’80s-’90s: acquisition of the areas through expropriation or good-natured agreements (Archaeological Mining Park of San Silvestro, Archaeological Park of Baratti and Populonia, Coastal Park of the Sterpaia)

1997-1998:production work for the Archaeological Park of Baratti and Populonia

1998: opening of the Archaeological Park of Baratti and Populonia

2001-2003:archaeological research activities on the Promontory of Populonia

2004: completion of the 2002-2004 three-year excavation campaign in the areas of the promontory of Populonia, financed with funds of the Regional Council and the BCA Ministry, conducted on the basis of a single research project coordinated among the Archaeological Office and the Universities of Siena, Pisa, Florence, Venice, Municipality of Piombino and Val di Cornia Parks S.p.a as regulatory body of the project, with concomitant editorial office, approval and funding, with funds of the Docup Regione Toscana, of the project for the development of the Archaeological Park of Populonia, following the excavation project of the three-year period 2002-2004.

2005: excavation activities on the Acropolis of Populonia: development of the Archaeological Park of Baratti and Populonia