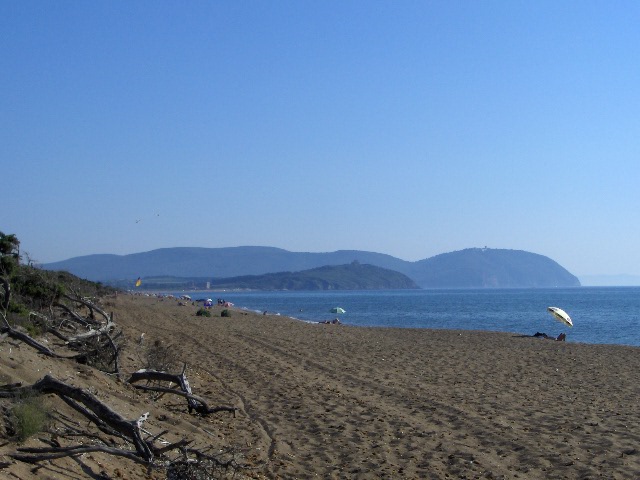 A strip of luxuriant green landscape, overlooking the sea, where the Mediterranean vegetation is particularly varied in constituent species, form and colour.
The park extends over beaches and dunes where the bush has been shaped by sea breezes, and on to the shady forest dominated by holm oak and by maritime pine with their characteristic parasol-shaped tops.
The Coastal Park of Rimigliano occupies the most southerly part of the Livorno Municipality territory of San Vincenzo, on the border with the Municipalities of Piombino and Campiglia Marittima.
It covers around 650 hectares between the sea and the Rome-Genoa railway line, and is spilt lengthways from north-west to south-east by the provincial road the Principessa (SP 23), connecting San Vincenzo to Piombino. The road divides the park into 2 areas: on one part (sea side) the wooded coastal strip with its system of dunes and the beach, on the other more extended section of the park, including the farming areas, the former lake area of Rimigliano, the varied wood with prevalently oak species which replaces the preceding pines.

The protected coastal area covers an area of about 150 hectares, along about 6 kilometres of coast of depth varying from 200 to 500 mtrs.

The park enjoys extremely favourable climactic conditions: the presence of the hilly range of Monte Calvi, to the east, protects the coast from the fresh continental winds, whilst the Promontory of Piombino, to the south and the Island of Elba to the west, reduces the strength of the maritime winds. The hot summer is eased by the constant presence of sea breezes. 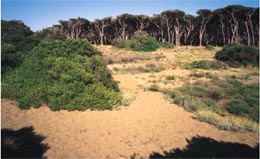 The beach, characterized by a system of protective dunes, is equipped with showers and public toilets positioned at specific points; it offers the opportunity for a bathing experience completely surrounded by nature, with the vista ranging from the vegetation of the promontory of Piombino, the tangle of shrubs sand-beaten by the wind which hits the beach, and the unmistakable light blue silhouette of the Tuscan archipelago of islands on the horizon.